Watching My Life Flash Before My Eyes 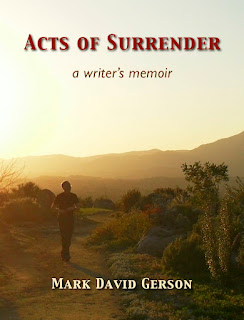 Every book I have written, beginning with The MoonQuest, has challenged me not only creatively but emotionally. Not surprisingly, each successive book has stepped up the challenge.

My fifth book (after The Q'ntana Trilogy and The Voice of the Muse: Answering the Call to Write) is this Acts of Surrender memoir that I have been posting about off and on since I began work on it in 2009. As I have mentioned before, the book itself is an act of surrender, as I never wanted to write it. Curiously (or, perhaps not), my Muse pushed me into putting together a memoir-writing workshop and then, when it was over, stunned me with this announcement: "Now, it's your turn!"

There is little in Acts of Surrender that I haven't already revealed -- in classes, in talks, in coaching sessions or in this blog or its predecessor. Yet, there is something about revisiting all those stories at one time and shaping them into a book that pushes more buttons than I thought possible.

Writing this memoir is what I call a portal experience...the kind of experience after which life is never the same...the kind of experience that propels you into the unimaginable, into a world that, from this side of the threshold, your mind could never recognize. It's a kind of death leading to a new kind of life. So it's fitting that in crafting this book, I get to watch my life flash before me, however slowly. I get to not only revisit the triumphs and tragedies, but to relive them...to feel their emotional power again, just as, ironically, Ben must do in The Q'ntana Trilogy's final act, The SunQuest.

The buttons I referred to earlier are healing buttons. With every moment of physical or emotional distress, and there have been many, I befriend another ghost from my past and free it to move on, just as it frees me to do likewise. As I wrote in my notes to that memoir-writing workshop three years ago, in a sentence that has now found its way into Acts of Surrender, "Every day’s writing about the past brings more revelation about the present." And every day's revelations about the present propel me into a future that I cannot yet see but that I know awaits me in the turning of the next page.

UPDATE: Acts of Surrender: A Writer's Memoir is finished, published and now available for Kindle, Nook, Kobo and iBooks.

• More on Acts of Surrender, including illustrated excerpts

Please "like" my Facebook pages:
• Acts of Surrender book
• The Q'ntana Trilogy Movies
• The MoonQuest book
• The Voice of the Muse book
• Mark David Gerson

Email ThisBlogThis!Share to TwitterShare to FacebookShare to Pinterest
Labels: acts of surrender, memoir, The MoonQuest, The Q'ntana Trilogy, The SunQuest

An Act of Surrender 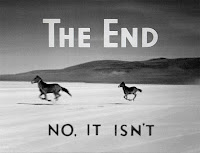 An excerpt from my memoir, Acts of Surrender: A Writer's Memoir...

It’s May 6. I have just finished breakfast, and as I stare into my empty coffee cup, I contemplate my immediate future. It has been less than twenty-four hours since I completed a final draft of my novel The SunQuest and, along with it, an odyssey that has occupied nearly one-third of my life: Eighteen years ago I surrendered to the words that would become the first draft of The MoonQuest, a story I knew nothing about, a story that would launch a fantasy trilogy that I did not yet know existed. Now that I have written “The End,” both to The SunQuest and the trilogy, what’s next for me? 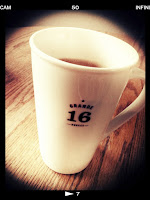 As I stare into that coffee cup, I am certain that another draft of this memoir, of Acts of Surrender, must follow The Q’ntana Trilogy on my creative agenda. How can it not when The SunQuest is, among other things, about Ben’s coming to terms with his past? How can it not when Ben’s story, like Q’nta’s and Toshar’s before him in The StarQuest and The MoonQuest, is also my story? Hardly a day went by, while I worked on The SunQuest, that I failed to notice a parallel between Ben’s life and mine, between what he discovers through reliving his journey on the page and what I have already discovered through living mine on these pages.

At the same time, I ask myself: Wouldn’t it make sense to wait a month before taking on a new draft of Acts of Surrender? Between the Q’ntana screenplays and novels and the early drafts of this memoir, I have been writing nonstop for nearly two years. Maybe it’s time for a break. Besides, I have a business trip to Las Vegas coming up in a few weeks. Wouldn’t it make sense to wait until I get back?
You would think that after writing three fantasies where conventional sense is an elusive commodity, not to mention penning two drafts of a memoir that exposes similar threads in my own life, I would have more sense than to ask questions about sense. Apparently, I don’t.

The coffee cup is still empty, and my mind wanders, away from my creative life and on to my life — not that it’s altogether possible to separate the two. I have now been back in Albuquerque for eighteen months. A 2010 move from here to Los Angeles ended after ten weeks, when I felt a call to return to New Mexico. Through this, my third sojourn in Albuquerque, I have become aware how much my life here has come to resemble my 1994-95 time in rural Nova Scotia: a hermit-like existence where little occurs beyond my writing. In Nova Scotia, my focus was on the first two drafts of The MoonQuest; once they were finished, I found myself back in Toronto, my monkish tendencies forgotten. 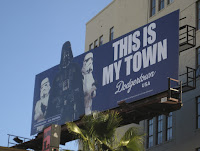 There is, however, one significant difference between these two periods in my life: In Nova Scotia, I had no conscious desire ever to leave. I thought I had rebirthed myself on the East Coast and, when the call came for me to go back to the big city, I was initially startled and dismayed. Here in Albuquerque, I have never stopped longing to get back to L.A., to resume a life that has felt on hold since I returned here.

Suddenly, the opening scene of The MoonQuest pushes my mental wanderings aside. In it, the dreamwalker Na’an interrupts an elderly Toshar, who has long resisted writing his story.

“It is not for me to boast of my exploits,” Toshar argues. But Na’an is firm. “It is your story to tell,” she says. “It is for you to fix it in ink, to set the truth down for all to read.”

I cannot move on to other realms and set off on other journeys until I have told my story, I hear myself speak out loud, paraphrasing Toshar’s thoughts in The MoonQuest. The words catch in my throat, and I’m gripped by an emotion so strong that I find myself on verge of tears.

I can’t know what those other realms and journeys might be. I can’t know whether, in another parallel to my time in Nova Scotia, they will mark the end of my creative retreat and launch me back into the world’s bustle — this time to L.A. instead of Toronto. What I can do is recognize the charge I experienced and the truth that underlies it: Like Toshar, I must tell my story, this story, or I will not be free to move forward with my life. 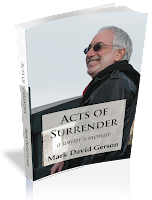 I know one other thing: Whatever the “sense” of the matter, I cannot wait a month to begin. In the act of surrender that is the book, I must make Acts of Surrender my primary focus, and I must begin now...in that realm where all stories begin: Once upon a time...

• An excerpt from Acts of Surrender: A Writer's Memoir (c) 2012 Mark David Gerson

Posted by Mark David Gerson at 4:44 PM 4 comments: Links to this post