As I was reading D.J. McIntosh's The Witch of Babylon

the other day in preparation for my June 18 radio interview with the author, I had an aha about The StarQuest (Book II in my Q'ntana Trilogy of fantasy novels) that was so obvious that it shouldn't have been classified as an "aha" at all.

You see, there has been this recurring descriptive detail in my sequel to The MoonQuest that has never felt right, no matter how much I have tinkered with it; and I have tinkered with it...in every draft since I began the first in (gulp) 1998! Suddenly, though, one throwaway phrase in McIntosh's thriller offered up a simple solution to my elusive problem!

Perhaps that's why The StarQuest told me soon after that it's finally time to release it...as soon as I make the appropriate alterations, of course. (Yes, I talk to my books; why wouldn't I, when they know their story far better than I ever will!)

Then, yesterday, as I began skimming through the manuscript to make the necessary revisions, I stumbled on a phrase of my own, on page 74. "You idiot!" I shrieked out loud. The solution to my "problem" had been right in my own manuscript -- probably since the first draft! At the same time, that solution probably couldn't make itself known until the book was ready to be published. 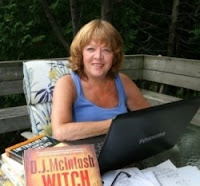 I'm still grateful to Dorothy McIntosh and will be certain to tell her so when she's on The Electric Muse with Mark David Gerson in a few weeks. For now, though, I'll be spending the next while prepping The StarQuest for publication.

My goal? A July 9 release, to coincide with the 16th anniversary of my "accidental" arrival in the U.S. (a story I share, along with many others, in Acts of Surrender: A Writer's Memoir

). And as July 9 is a Tuesday, the day The Electric Muse with Mark David Gerson airs, I've recruited author/singer/songwriter Amy Robbins Wilson and asked her to interview me on that show -- a show all about The MoonQuest, The StarQuest and The Q'ntana Trilogy books and movies.

What about The SunQuest? Well, if Amy asks during the show, I'll tell her that I aim to get this final Q'ntana installment out before the end of the year: on my birthday, October 3. That means that by the end of 2013, the 19-and-a-half-year-long literary odyssey that began in March 1994 with The MoonQuest book will have come to an end. To quote Charity in the musical Sweet Charity, "All I can say is WOW!!" What a journey!

The StarQuest will be available on July 9 in the Kindle, Nook, iBook, Kobo and Google Play stores, where you can also find The MoonQuest

, a multiple award-winner and on its way to the big screen. The MoonQuest

is also available in paperback at Amazon.com.

Email ThisBlogThis!Share to TwitterShare to FacebookShare to Pinterest
Labels: D.J. McIntosh, Dorothy McIntosh, ebooks, the electric muse, The MoonQuest, The Q'ntana Trilogy, The StarQuest, The SunQuest 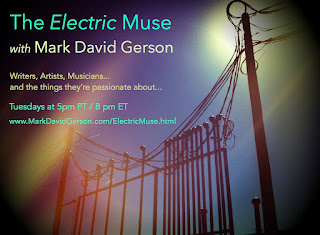 What is The Electric Muse with Mark David Gerson﻿? A brand-new radio show featuring an eclectic blend of authors, playwrights, screenwriters, directors, musicians, photographers, visual artists -- all talking about themselves, their work, their passions and their muse.

Want a sneak preview of a lineup that includes a writer/director who spent his boyhood palling around with Marilyn Monroe, Marlene Dietrich and Paul Newman, a New York Times bestselling author with more than 100 books to his credit, one of Houston's "Top 100 Creatives" and the author of a historic thriller described by CNN as "one of the six enduring historical thrillers"? Visit www.markdavidgerson.com/electricmuse.html. And be sure to bookmark the page so you don't miss any new additions to the exciting roster!

• Tune in to The Electric Muse with Mark David Gerson every Tuesday at 5pm PT / 8pm ET starting June 4 on the Authors on the Air Global Radio Network. Don't miss an episode! But if you must, you can always catch it after the fact. Just look for links to every episode on my website.

Don't forget! June 4 at 5pm PT / 8pm ET...and every Tuesday after that: The Electric Muse with Mark David Gerson.

Please "like" these Facebook pages...
• Acts of Surrender book
• The Q'ntana Trilogy Movies
• The MoonQuest book
• Writing Books/Recordings & Inspiration
• Mark David Gerson
Please follow me on Pinterest and Google+
Posted by Mark David Gerson at 4:28 PM No comments: Links to this post 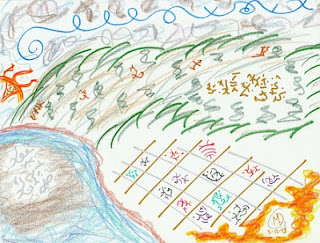 "It’s as though a fiery pilot light burns somewhere beneath L.A.'s endless sprawl, a flame that rekindles and renews my life force whenever I travel its streets and freeways and that calls to me wherever in the world I find myself."
~ Mark David Gerson

Like my writing and photography, drawing just sort of snuck up on me. I never saw myself as an artist, and I was startled to sell my first piece. I was even more incredulous when other visual artists began to introduce me to their friends and colleagues as "a fellow artist"!

And like my writing and other creative endeavors, drawing is a medium I don't plan out. I simply stare at the blank page until the first color and pencil stroke call out to me. As for the rest of the drawing, it's never any less an act of surrender.

To view/purchase any of my artwork or learn about my custom portraits, visit www.markdavidgerson.com/art.html.
• Direct Link to "City of Destiny"(#126)

Each 8.5" x 11" print comes with information about the drawing, along with instructions on how to tap into its potential as a crystal-like a tool for healing. All prints sell for US$10 each as a downloadable file that you can print out yourself or for US$20 (plus shipping) for a mailed print.

Please "like" these Facebook pages...
• Acts of Surrender book
• The Q'ntana Trilogy Movies
• The MoonQuest book
• Writing Books/Recordings & Inspiration
• Mark David Gerson
Please follow me on Pinterest and Google+
Posted by Mark David Gerson at 12:33 PM No comments: Links to this post

Get any of my ebooks for only US$3.99
For Kindle, Nook, Kobo or iBooks 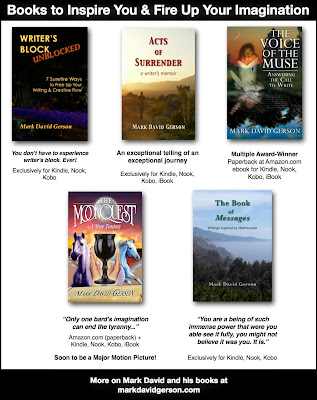 • The Voice of the Muse: Answering the Call to Write
• The MoonQuest (The Q'ntana Trilogy, Book I)
• Acts of Surrender: A Writer's Memoir
• The Book of Messages: Writings Inspired by Melchizedek
• Writer's Block Unblocked: 7 Surefire Ways to Free Up Your Writing and Creative Flow
Purchase Links for All Ebook Titles

Don't forget to check out my new
Tele-Classes for Writers 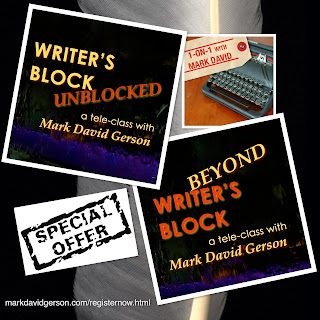 Posted by Mark David Gerson at 10:10 PM No comments: Links to this post

Everything Old Is New Again...Again 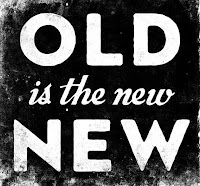 It's déjà vu all over again.
~ Yogi Berra

It's early 2009. I'm just coming out of a period of reclusiveness and I find myself suddenly thrust back into the public eye. If I did few public appearances other than book-signings when The Voice of the Muse: Answering the Call to Write

was released eight months ago, I'm suddenly in nearly unquenchable demand for my insights about writing and the creative process. One coaching client grows to two, three, and then a dozen. I'm giving frequent talks and seminars. I'm teaching regular classes and workshops. I'm speaking at conferences and expos. I'm traveling. I have a media presence -- with my own radio show and as a frequent guest on others'.

And then, 18 months later, it all stops, almost as suddenly as it began and, for the next three years, I find myself turning inward again, focused almost exclusively on writing projects that force themselves on me with insistent urgency. Through that time, I finally complete The StarQuest novel, first sequel to The MoonQuest

and a project that has been more than a decade in the making. I also complete my Acts of Surrender memoir, another project that has lingered far too long. In addition I start and take to their final drafts The StarQuest screenplay and The SunQuest novel and screenplay, as well as a new book on writing, Writer's Block Unblocked: 7 Surefire Ways to Free Up Your Writing and Creative Flow

. It's a period of unprecedented creativity...and one that has just now shuddered to a halt.

Now, in an echo of 2009, I find myself thrust out of my creative seclusion in many of the same ways I was four years ago.

At first glance, you might be tempted to say, as I briefly was a few days ago, "Can't this guy move on? He's doing all the same stuff he used to do. How is that progress?"

No, this is not Groundhog Day and I'm not Bill Murray's arrogant weatherman. My experiences may appear to be identical to those of three and four years ago, but they're not.

As I have written here before, I dislike the expression "coming full circle" because it suggests that we're returning to a place we've already been, having learned nothing and grown not at all. My preferred image is that of a spiral, where we return to a place along the same axis, but at a higher level of consciousness and understanding, and where we are given the opportunity to operate, as I put it in a The Voice of the Muse, at "a higher level of awareness, mastery, openness and trust."

Where do I go from here? If this renewed beginning is still somewhat veiled, it is replete with the promise that all new beginnings offer. Once again, from The Voice of the Muse: "From silence to silence, word to word, trust to trust -- the spiral is an infinite one, carrying you from one beginning to the next and one ending to the next on a journey with no beginning or ending."

The spiral is an infinite one. Mysterious, too. I can't even begin to imagine where it will carry me next.

For now, though, please check out these renewed, turn-of-the-spiral activities...


To celebrate the launch of Writer's Block Unblocked for Nook and Kobo, all my Nook, Kindle and Kobo ebooks are on sale for US$2.99 each through May 5...