Making The MoonQuest Movie a Reality

"In a land where fear rules and storytelling spells death, only one bard's imagination can end the tyranny." 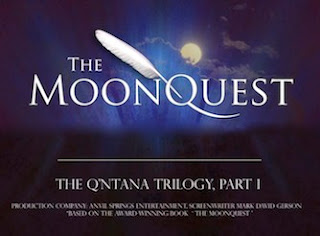 If you've been following this blog, you know that I've long seen my visionary fantasy novel, The MoonQuest, as a movie. You probably also know that, through Anvil Springs Entertainment, that dream is on its way to becoming a reality.

To help accelerate that process, I'm now working with Anvil Springs to produce three short trailers -- one for The MoonQuest and one for each of its two sequels, The StarQuest and The SunQuest. Together the three stories (book and film) make up The Q'ntana Trilogy.

The trailers will be presented to investors in the coming months to inspire them to invest in a feature-film version of The MoonQuest, the first of the trilogy to be produced.

So far, for the trailers, we've assembled a stellar cast of actors, a dedicated crew and a committed production and postproduction staff. Most are local to New Mexico, but some are planning to travel to Albuquerque from Los Angeles next month for the film shoot. One of the many miracles surrounding this project is that everyone involved is not only a professional but a volunteer who believes passionately in the project. They're volunteering because our starting budget for these trailers was $0.

By the way, miracles have surrounded this project almost since the day the book came out.

It was at one of my very first book-signings, in an Albuquerque Borders Books & Music, that I met Kathleen Messmer, who had just created Anvil Springs and was on the lookout for new projects. She loved both the book (which hadn't yet won its multiple awards) and my screenplay adaptation, and the rest is history.

Although we began trailer production on a zero budget, we've come to realize that there are some expenses we just can't avoid incurring, not least because New Mexico isn't the best resource for the medieval-style costumes, props and settings required for this type of fantasy.

That's where you come in.

Today, we launched a fundraising campaign on Indie GoGo, the web's premier platform for the grassroots financing of independent creative projects. With your help, we can raise not only our $3,000 Indie GoGo goal for The MoonQuest trailer, but an additional $2,000 to make sure that the StarQuest and SunQuest trailers are also filmed -- and that all three are of the superlative quality that will propel their respective features to the big screen.

To thank you for your contributions as low as five dollars, we're offering a series of gifts, ranging from a public thank you to a day on set during the filming of the trailer. In between, there are opportunities to get MoonQuest merchandise, a studio-photographed headshot, an hour's creativity or life coaching from me...and more. But you can give a gift of any amount -- even one dollar...or less.

A few hours ago, one of my Facebook friends posted this on my wall:

"I don't know anyone who is living their dream more than you."

I feel incredibly blessed to find myself in that place. With your help, I can take that dream to its next level -- not only for myself but for all those who will be touched by the life-affirming message of the Q'ntana stories.

Please share news about our Indie GoGo campaign and our project wherever you can -- on Facebook, MySpace and Twitter, on blogs and to your friends. The more people who know about the campaign and the project it's supporting, the sooner you'll see The MoonQuest in a movie theatre near you!

Finally, if you would like to make other types donations (for example, bottled water, snacks, props, wardrobe, etc.) or have skills you can contribute, please write to us at info@anvilspringsentertainment.com.

• Once again, here's the link to our Indie GoGo campaign.

The Myth of Writer's Block, or How to Get Writing & Keep Writing (Video)

You don't have to experience writer's block.

Writer's block is a myth -- not because you won't ever feel stuck but because there's no reason for you ever to stay stuck.

If the video doesn't appear above, or if you'd rather view it in HD, click here.

(If you're on my mailing list and seeing this in an email, click the image above, which links to my blog and the "The Myth of Writer's Block" video.)

• For more videos about writing and the creative process, visit my YouTube page.

• You'll find additional tips and inspiration on my web site, where you can read my "Rules for Writing," sign up for my mailing list and read/hear free excerpts from The Voice of the Muse: Answering the Call to Write.

Posted by Mark David Gerson at 8:22 PM No comments: Links to this post

Resistance is Futile, or How to Unstick When You're Stuck

Writer's block is nothing more nor less than your resistance to those words that would have their way with you if you would but surrender to them.

Instead, you say, "No, not these words. I want others."

Well, there are no other words. There are only heart words.

Do it now. Write. Surrender to the story, whatever it is. Dissolve your resistance. And let those words you have run from have their way with you. Now.

Adapted from The Voice of the Muse: Answering the Call to Write, from the "Myth of Writer's Block" section.
Posted by Mark David Gerson at 8:11 PM No comments: Links to this post

What Makes a Good Writer? (Video)

How do you define a "good writer"? It's a question I'm often asked in interviews and by coaching clients, and there are probably as many definitions as there are definers.

Is being a good writer about your content? About your process? Or is it about surrendering to the Muse Stream and letting your story have its way with you? Watch the video below for my answer.

(If you're on my mailing list and seeing this in an email, click the image above, which links to my blog and the "What Makes a Good Writer" video.)

• For more videos about writing and the creative process, visit my YouTube page. 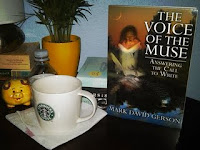 • You'll find additional tips and inspiration on my web site, where you can read my "Rules for Writing," sign up for my mailing list and read/hear free excerpts from The Voice of the Muse: Answering the Call to Write.

Anvil Springs Entertainment is currently accepting resumes for ALL CREW POSITIONS for for three feature-film trailers: for The MoonQuest and each of its two sequels, The StarQuest and The SunQuest.

We will be filming the three feature trailers during two weekends in February in the Albuquerque and/or Santa Fe areas. This will be a non-union, low/no/deferred pay production. 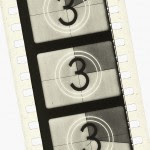 Anvil Springs Entertainment is holding a second open casting call for speaking and background roles for three feature-film trailers: for The MoonQuest and each of its two sequels, The StarQuest and The SunQuest.

Casting non-descript / all types; Ages 16+
(If you're under 18, you need a parent present.)
Various Speaking Parts Available
Background needed: Villagers and Soldiers

*** Please do not call the hotel with questions.

This is an action-packed, fantasy-themed trilogy: Think of The Chronicles of Narnia meets Lord of the Rings.

Filming will take place during two weekends in February. This is a non-union, no-pay shoot. However, meals will be provided.

If you can't make this open casting call, please submit your headshot and resume to: casting@anvilspringsentertainment.com

*** If you attended the previous casting call or have submitted via email, your information is on file. There is no need to attend this casting call.