How Sara's Year Got Its "After" 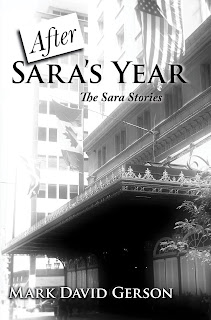 When the earliest readers of Sara’s Year approached me in the days and weeks following the book’s publication, they spoke with a single voice, and an unexpected one: “We want more,” they cried.

Many wanted to know what was next for Marc-Allan Cameron (Mac), the celebrity artist in Sara’s Year who turns out to be as unlucky in love as he is lucky with fame and fortune. Others demanded to know the fates both of Bernie Freed, the young man who walks out on his mother’s funeral and spends the rest of Sara’s Year discovering all that he never knew about her and about himself, and of his friend, Erik Donnekin. And what about the title character, still others asked: What’s her after Sara’s Year story?

As I wrote in the introduction to Sara’s Year (and in an earlier blog post), that book was sparked by a series of health scares, in the midst of which I asked myself what I would want to make sure I accomplished should the worst occur. The answer was a new novel. Sara’s Year was the result.

It was to be a one-off. When Sara’s Year was finished, I planned to produce a new book for writers.

Sarah’s fans had other ideas. (That’s not a typo: There’s a reason why Sarah the character has a different spelling than Sara the book.)

At first I insisted that there would be no After Sara’s Year. I felt complete with the story and its characters and felt no call to continue the saga. But as readers continued to push and prod, I began to reconsider.

In fact, the more I thought about it, the more I had to confess that I, too, was curious about the fates of Mac, Sarah, Bernie and Erik. But the character who most intrigued me, the one no one ever asked about, was Sadie Finkel. 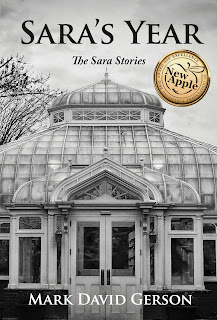 If you’ve read Sara’s Year, you’ll remember Bernie’s aunt as the quintessential alteh machashaifeh; that’s Yiddish for old witch (“that’s witch with a b”). Sadie was so utterly unpleasant in Sara’s Year that the author in me wondered how she had become that way and whether there could be any hope for her.

It didn’t take me long to realize that the only way I would find out what happens to Mac, Sarah, Bernie, Erik and, yes, Sadie would be to write them into another Sara story. And now it's finished!

Although After Sara’s Year is, officially, the second book in what I am now calling The Sara Stories, you don’t have to have read Sara’s Year in order to be able to follow this new story. The two books are interconnected, but each telling stands on its own.

By the way, The Sara Stories will not end with After Sara’s Year. I had barely begun a second draft of Sara’s Year when an idea for a third installment in the series popped into my head. No, I won’t be calling it After After Sara’s Year, but it looks as though it will include all your favorite Sara characters...plus more!

For now, though, I invite you to enter (or reenter) the world of Sarah and her friends in After Sara’s Year, the book I couldn’t have written without readers like you. And to encourage you, I have a special offer for you:

Preorder your signed copy of After Sara's Year today, and start reading it before it hits bookstores!


You haven't read Sara's Year?
No problem. Each of the Sara Stories stands on its own!

Look for both books at
www.thesarastories.com

While you're there, considering adding the award-winning Sara's Year to your order – for yourself if you haven't read it yet or for a friend if you have...or any of my other books. Just let me know to whom you want those signed as well. 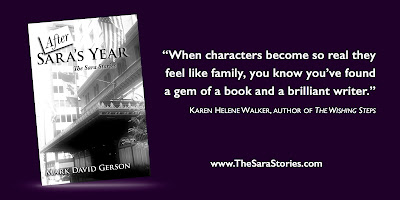 For Sadie Finkel, it's been more than 50.

When life comes knocking, will they let it in?


The newest spellbinding addition to the award-winning Sara Stories!


Preordered books will ship by mid-August, Priority Mail to US addresses.
** Note to Canadian Readers: If there's a Canada Post shutdown, your books will ship once the labor dispute is over. To bypass Canada Post, contact me about UPS rates.
Posted by Mark David Gerson at 8:11 AM No comments: Links to this post

In February Sara's Year was named the top 2015 medal-winner for general fiction in the New Apple Book Awards! This is a first literary award for Sara but a ninth for its author, with six prizes already received for The MoonQuest and two for The Voice of the Muse: Answering the Call to Write. Check out these critically acclaimed books today!

• Look for all my books on my website or in paperback or ebook from your favorite online bookseller.

• Preorder your signed copy of After Sara's Year, my sequel to the award-winning Sara's Year, TODAY!
Posted by Mark David Gerson at 9:51 AM No comments: Links to this post