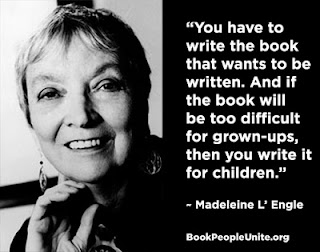 Through both her fiction (ie, A Wrinkle in Time) and non-fiction (memoirs and books about spirituality/writing) author Madeleine L'Engle has long been a major influence in my life. I didn't discover A Wrinkle in Time

until I was an adult in the early years of my spiritual awakening. But when I did, I found it to be a gem of a book, filled -- as is all L'Engle's writing -- with spiritual truths for young adults and adults alike. Today, two decades after that first reading, the profound wisdom of this prolific author and devout Episcopalian continues to inspire me. 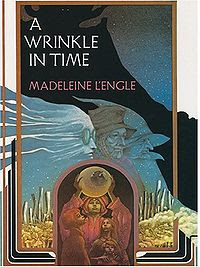 One of my favorite L'Engle stories, apart from the one that follows, comes from one of her nonfiction books -- I don't now remember which. In it she describes legions of white-bearded Old Testament prophets, their faces raised to the sky, shouting up at God, incredulously: "You want me to do what!?" There are still days when I know just how they felt!

It would have been a supreme privilege to have able to meet Madeleine L'Engle, but she died in 2007, before I had the opportunity. To mark her birth and celebrate her life, I am reprinting this, one of my most popular blog posts.

Feeling rejected? When you read L'Engle's story, I guarantee you won't be dejected!

, which, once it was finally published in 1962, went on to win major awards and be translated into more than a dozen languages.

Toward the end of that two-year period, L'Engle covered up her typewriter and decided to give up -- on A Wrinkle in Time and on writing. Then on her way downstairs to the kitchen, a revelation: an idea for a novel about failure. In a flash, she was back at the typewriter. 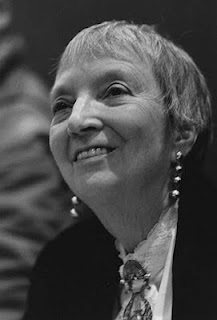 "That night," as she explained in April 1993 on the PBS documentary Madeleine L'Engle: Stargazer, "I wrote in my journal, 'I'm a writer. That's who I am. That's what I am. That's what I have to do -- even if I'm never, ever published again.' And I had to take seriously the fact that I might never, ever be published again. ... It's easy to say I'm a writer now, but I said it when it was hard to say. And I meant it."

Today, the bibliography on L'Engle's web site lists 62 works spanning the period from 1944 through 2005, plus a 63rd, published posthumously in 2008. Sadly, Madeleine L'Engle died in September 2007.

"I cannot possibly tell you how I came to write A Wrinkle in Time," her New York Times obituary quotes her as having said. "It was simply a book I had to write. I had no choice."

Whether you're published or not, if you're writing, you are a writer.

Need some help believing that? watch the video meditation, "You Are A Writer." The audio was drawn from The Voice of the Muse Companion: Guided Meditations for Writers.

Posted by Mark David Gerson at 10:33 AM No comments: Links to this post

Email ThisBlogThis!Share to TwitterShare to FacebookShare to Pinterest
Labels: being a writer, Madeleine L'Engle, perseverence, persistence, publication, publishing, rejection, the writer you are, video, youtube

I'm in the midst of rationalizing and reconfiguring my email addresses, both business and personal, and some existing addresses for me will soon disappear. If you're getting this post in your email, then you're on my mailing list and, if I did it right, you'll see my new contact address on the "from" line of this mailing.

If you're not yet on my list, head over to www.markdavidgerson.com; there's a subscription blank at the bottom of every page. There's also one in the sidebar of this blog.

As always, I look forward to hearing from you!