Why Are Americans Afraid of Dragons?

This piece originally appeared in December 2008 on my now-dormant New Earth Chronicles blog.

I'm in the video section of Target, Christmas shopping for my daughter. As I'm browsing through the movie racks, I overhear an older and younger woman discussing which DVD to buy a child on their list.

"Does it have magic in it? I don't want a movie with magic," the older one -- her mother? -- responds sternly.

They move out of earshot and I'm too stunned to follow.

Are we truly living in some version of The MoonQuest's mythical setting? This land where vision is outlawed and visionaries put to death, where myth and magic are forbidden, where "once upon a time" is a forbidden phrase, and where fact is the only legal tender was a creation of my imagination... Or was it?

What kind of culture have we created where children are denied magic, where fantasy is suspect and where dragons are relegated to dustbins?

Thirty years ago in an essay, author Ursula K. Le Guin asked, "Why are Americans afraid of dragons?" She concluded that most technological cultures dismiss works of the imagination because they lack measurable utility, an outlook only exacerbated in this country by our Puritan heritage.

If 30 years ago dragons were not fit for adults, are they now unfit for children, too?

While the Harry Potter books and movies broadened the reach of imaginative fiction for kids (and adults), it also expanded our hysterical suspicion and suppression of it.

The fact is, imaginative fiction opens our hearts, expands our spirit and broadens our minds in ways that nonfiction never can, and that magical/fantastical fiction can carry more truth in its castles, dragons and trolls than many pieces of so-called literature.

That's why I call The MoonQuest a "true fantasy." There is nothing factual about it. But as those two women in Target have proven, it's decidedly true.

I came across this piece earlier this evening as I was pulling together some material for Acts of Surrender, my memoir-in-progress. Originally posted to my now-dormant New Earth Chronicles blog in July 2007, this piece remains as relevant today as it did back then -- for me and, I trust, for you. 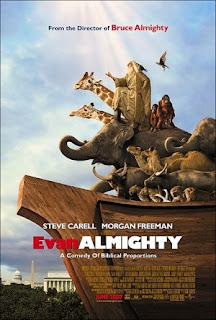 As I watch the new movie Evan Almighty

with my daughter this afternoon, tears mingle with laughter at the story of the ambitious newscaster-turned-Congressman whose life is turned upside-down when God tells him to prepare for an impending flood by building an ark.

I have never been asked to build an ark, but I have been guided along roads that seem equally bizarre and incomprehensible, in directions that others have judged or mocked.

Ultimately, though, as with Evan and his flood, the higher guidance has always proven itself wiser and more knowing than a limited human mind that is always trying to figure things out and cling to control.

As the film credits roll, I'm reminded of the song Use Me, Rickie Byars Beckwith

Use me
Oh, God
I stand for you
And here I'll abide
As you show me
All that I must do

's description of the Old Testament as filled with bearded prophets shouting up to the heavens, "You want me to do what!?"

Evan is just such a prophet, as am I. As is each of you. For in every moment, the God Power we carry within is calling on us to do and be the impossible, to build our own version of Evan's ark, even though it makes no conventional sense, even though we don't know where to begin or who we'll be when we're done.

I wrote about the song Use Me in a November 2006 newsletter (The Choice for God), after having cried while singing it during a Sunday service at L.A.'s Agape International Spiritual Center.

Ironically, I had just recommitted to my then-unpublished novel, The MoonQuest, not realizing that this act of recommitment would result in its speedy publication -- by me! (You want me to do what!?)

My tears then as now are the tears of truth. I know that whether I stand in the vibration of that powerful lyric, in the resonance of today's movie or at one of life's many crossroads, my only choice is the highest choice, the choice that prophets through the ages -- all the way up to Evan -- have made: the choice for God.

My God is neither actor Morgan Freeman nor some force outside myself. My God is the divine within me, the highest imperative, infinite wisdom and creative intelligence that asks of me only that I surrender and allow it to use me -- to be me -- as it guides me forward.

As I prepare to leave Sedona tomorrow for parts (yet again) unknown, I recommit to that path of surrender and know that, in so doing, I walk in the path of God. And I am never alone.

And as I continue, in December 2011, to work on the Acts of Surrender memoir I have resisted so mightily, I recognize it as the latest in a long series of arks I have been asked to construct, all of which have proven their ultimate value, despite my initial doubt.

Please "like" my Facebook pages:
• Acts of Surrender book
• The Q'ntana Trilogy Movies
• The MoonQuest book
• The Voice of the Muse book
• Mark David Gerson

Posted by Mark David Gerson at 11:11 PM No comments: Links to this post