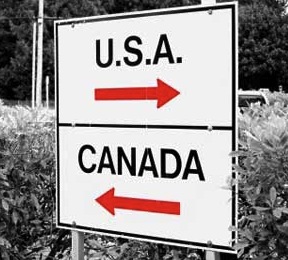 It was on this day in 1997 that, without consciously knowing what I was doing, I left my native Canada and launched into a new adventure in a new country. To mark my 17th anniversary in the U.S., here's an abridged version of how I chronicled that experience in Acts of Surrender: A Writer's Memoir.

"Sioux Narrows Provincial Park sits on one of the thousands of picturesque inlets that comprise Lake of the Woods, a vast lake system that straddles the Ontario-Minnesota border west of Thunder Bay. In the summer its shores are lushly green, and haunting loon calls from mid-lake usher in its otherwise-silent dewy mornings. That’s what I woke to on the morning of July 9, 1997 — unknowingly, my last as a Canadian resident.

"After scribbling a few postcards, I broke camp and drove five minutes south into town to mail the cards. My plan was to return to Transcanada Highway and the Winnipeg Folk Festival, which was to open a few days later. Once again my car had its own plan. Without fully realizing what I was doing, I turned right instead of left out of the parking lot. My new direction was south — toward Minnesota, the United States and, unbeknownst to me, my new country.

"The signal from CBC Radio, my constant companion on this open-ended road odyssey, was still strong as I crossed the border at Baudette. But as I continued southwest toward Bemidji, it grew weaker and weaker then stuttered into solid static.


© Mark David Gerson, from Acts of Surrender: A Writer's Memoir

It would be nearly a decade before I set foot in Canada again. Through those ten years I would call three U.S. states home, would marry, become a father and divorce, and would launch another open-ended road odyssey, this one lasting 30 months instead of the three that ultimately initiated my life in America.

Read more about the many acts of surrender that have comprised my journey in Acts of Surrender: A Writer's Memoir, available on most Amazon sites, from other online booksellers and from all major ebook-sellers. And read more excerpts on the book's Facebook page.

"A dynamic read for the creative spirit within each of us. Positive inspiration at its best."
– Hank Bruce, author of Peace Beyond All Fear: A Tribute to John Denver's Vision

"A book that has the power to awaken, empower and inspire anyone who reads it."
– Melissa Shawn, Austin, Texas

Posted by Mark David Gerson at 10:00 AM 2 comments: Links to this post

Renewing the Past, Stepping into the Future 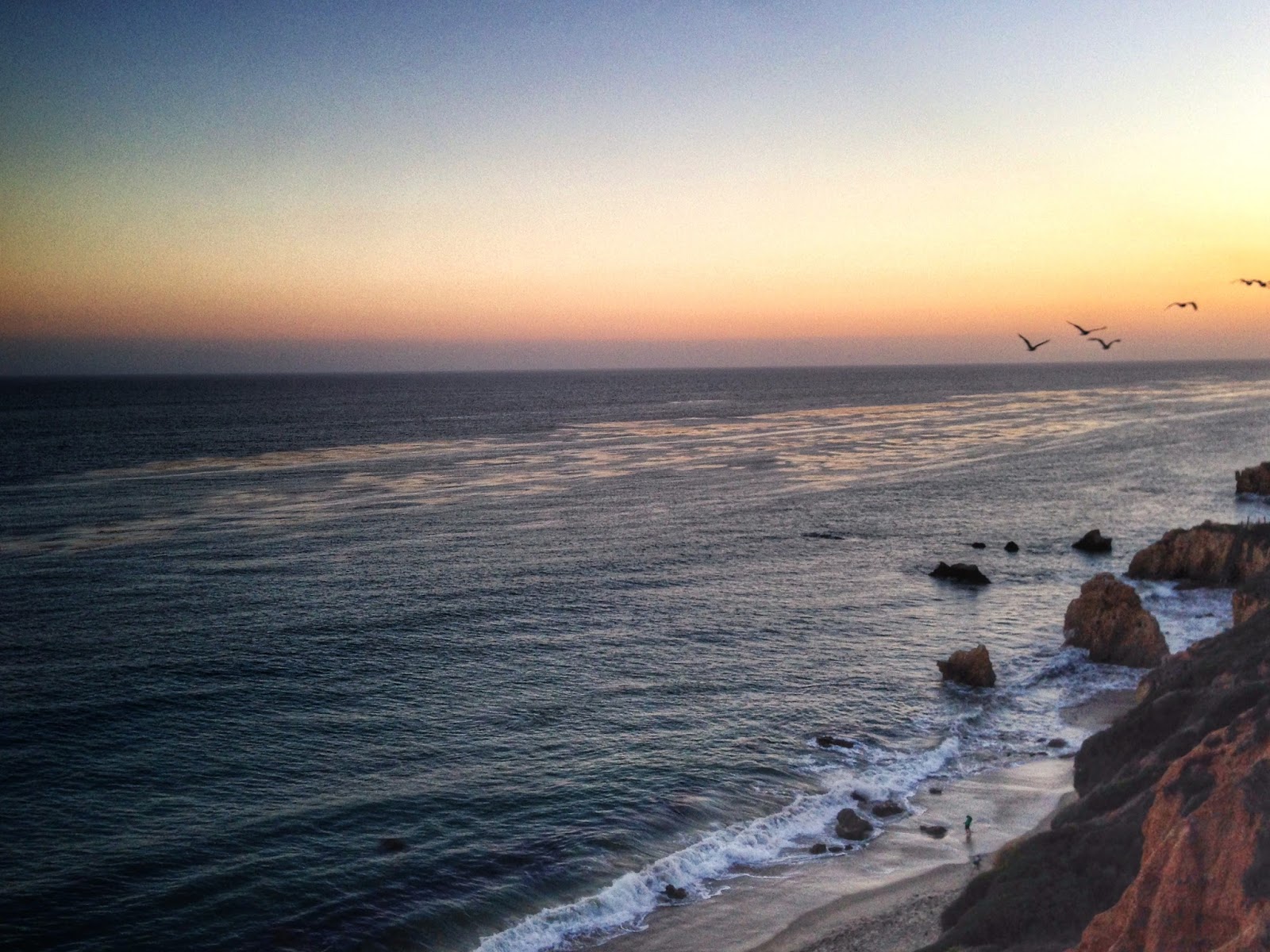 These are the final hours for the original edition of my award-winning first book for writers, The Voice of the Muse: Answering the Call to Write. By the end of the day (perhaps even by the time you read this), a new, expanded edition – complete with new cover – will have superseded it.

Just as I had mixed feelings earlier this year when I let The MoonQuest's original cover go in favor of its current updated look, it's with a certain ambivalence that I bid a grateful farewell to the original edition of The Voice of the Muse.

The MoonQuest and The Voice of the Muse were my first two published books, my first two literary babies. But they – and I – have grown up and matured in the years since their original release. It's now time for that maturity to be reflected in their public face. 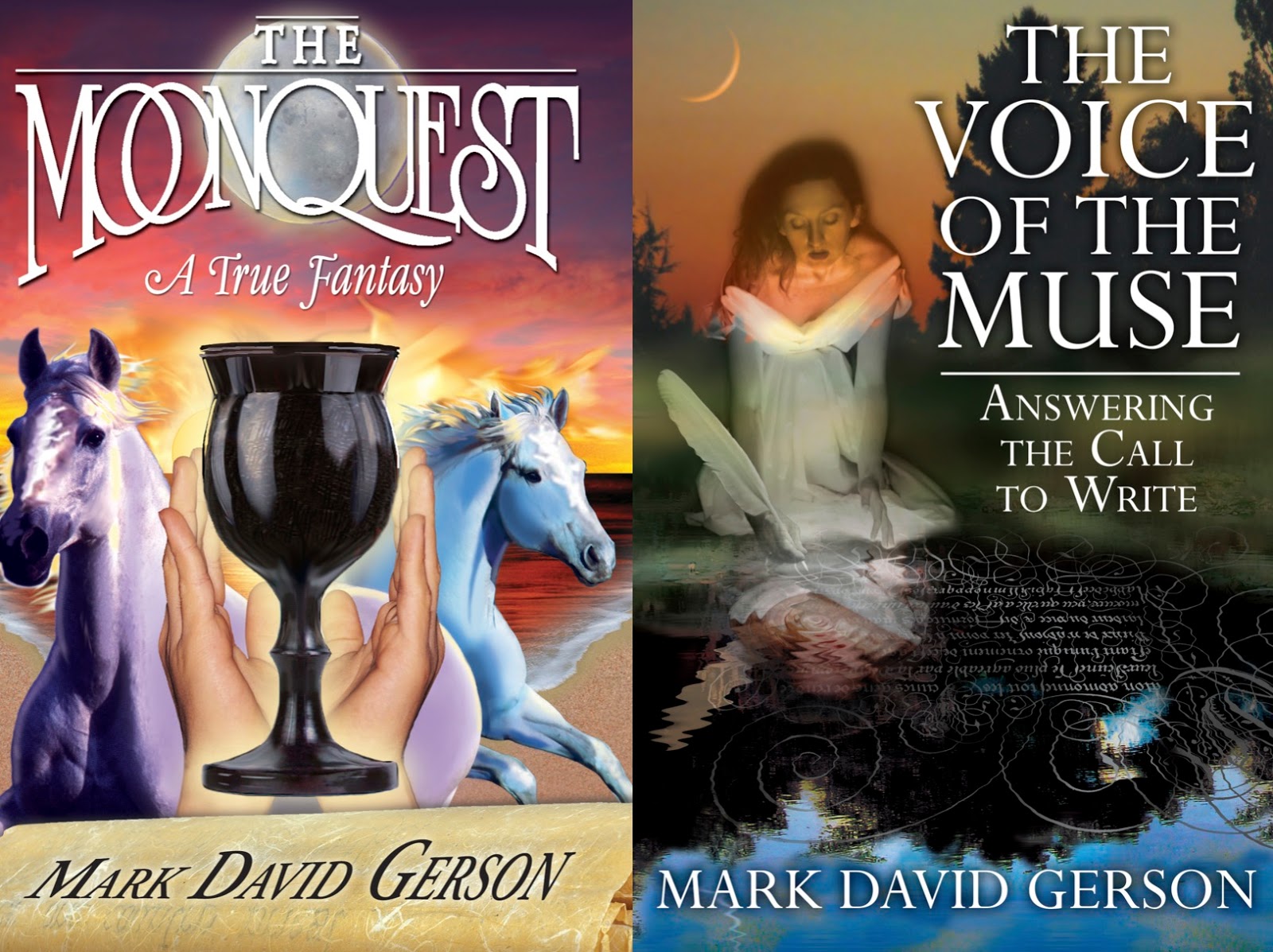 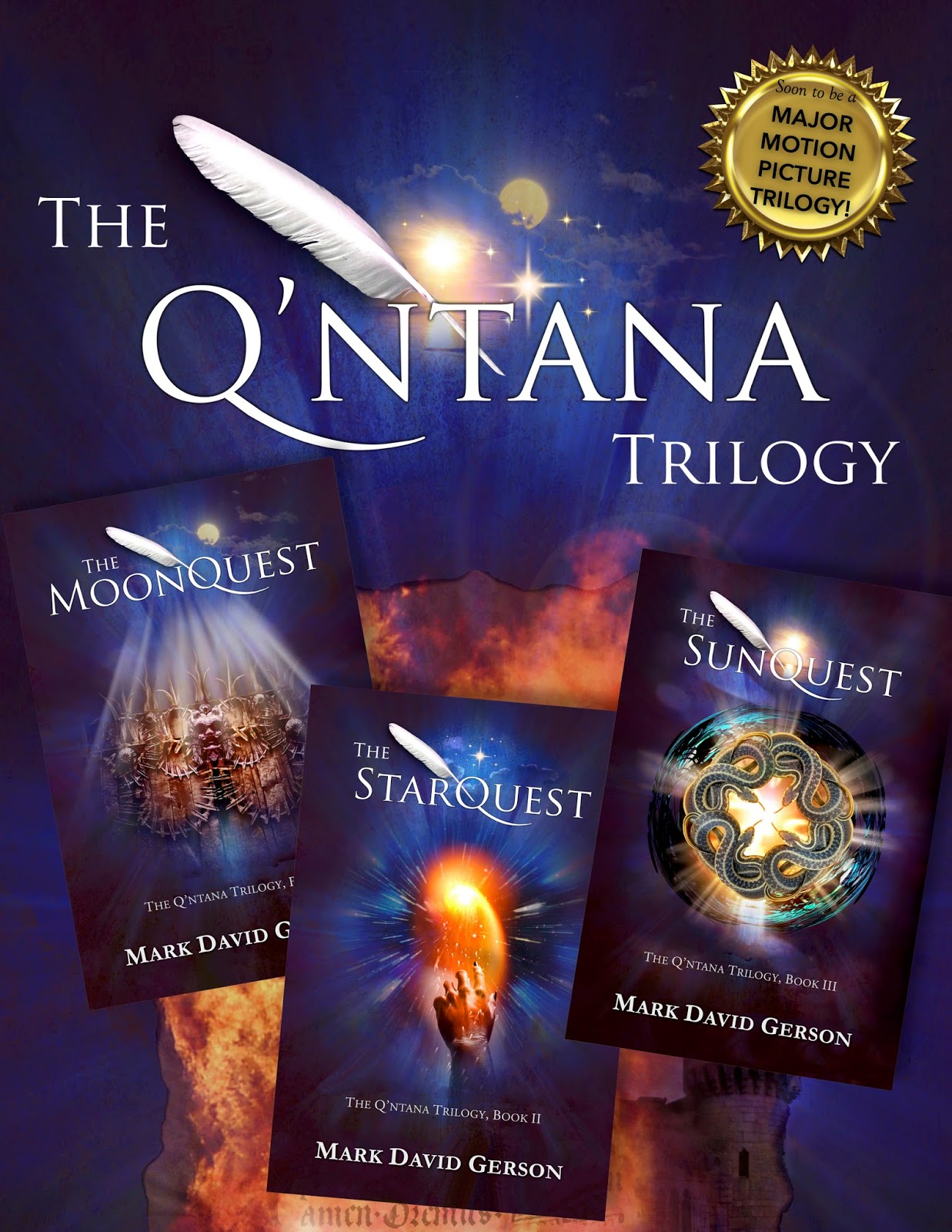 The MoonQuest's cover – like its StarQuest and SunQuest sequels – now better reflects the dark, dystopian reality of the worlds in which they are set. It's a world where the story's colored horses are not the fairy tale-like creatures they appear, at first glance, to be on the original MoonQuest cover. Magical they may be, but Rykka and Ta'ar are also sentient beings of immense power – for good, fortunately!

In all other ways, except for an inside-the-book redesign and the inclusion of a long-requested guide to the pronunciation of the story's sometimes-challenging names, The MoonQuest is unchanged.

The same cannot be said for the new edition of The Voice of the Muse: Answering the Call to Write.

The cover, of course, is a radical departure. Gone is the Muse figure so evocatively designed by Richard Crookes, even as, on the new cover, the Muse's ocean of stories remains – Malibu's El Matador Beach, in this instance. Replacing the Muse on the new cover is a current photo of me, not for any egotistical reasons but as a way of empowering myself to more clearly take ownership of the book and its sometimes radical concepts and to match the look, tone and feel of my other books for writers.

But there have been changes inside the book as the well. The Voice of the Muse is now 20 percent longer and, I hope, 20 percent more effective! It has been quite the journey, reexperiencing a book I had not read cover-to-cover since proofing the final first-edition galleys nearly seven years ago. In revisiting it, I was reminded that its first words were originally intended not for you, but for me.


I didn’t set out to write this book. It crept up on me when I wasn’t looking, when I didn’t know I was writing it. Many of the essays in this volume began as journal entries, self-motivating vignettes penned during a time when I needed inspiration.

I need that inspiration again today, as I launch into a new novel – my first since The SunQuest and a radical departure from my fantasy trilogy.

The Voice of the Muse wasn't the only one of my books I have reread over the past six months. Rather, it was the last of them. Since December, I have reread all three Q'ntana novels, my Acts of Surrender memoir, Writer's Block Unblocked and The Book of Messages. (My other two books, Organic Screenwriting and From Memory to Memoir, were written and published during that same period.) It has been an instructive, not always comfortable exercise – sort of like watching your life flash before your eyes, but via the written word!

The Voice of the Muse, however, is the only one of my books that I have altered, and I didn't do it lightly.

A book is a photograph in time, an expression of who the author was when he or she wrote it. His life, her world view, his thoughts, her philosophies, his prejudices, her quirks – they are all captured in a fixed, freeze-frame moment. Authors change and grow; the words, paragraphs and pages of their books cannot.

Perhaps they should not. In one sense, revisiting and updating a six-year-old book  as I have done with The Voice of the Muse – is like Photoshopping an old picture to make its subject appear fresh and contemporary. Wouldn’t it be better to leave the old book alone and write a new one that better represents who I am today?

That was my initial thought as I began to reread the book. In that moment, releasing a new edition felt almost fraudulent, as though I would be manipulating history.

Yet the more I read, the more I realized that The Voice of the Muse has grown with the times. Somehow, it has not only remained relevant over the years but has grown even more relevant.

In a world where public schools are being stripped of their arts programs and creativity is continually devalued in favor of “utility,” it has never been more important to rekindle passion, foster intuition and encourage self-expression. The Voice of the Muse still does all that and remains, to my astonishment, as cutting edge as ever.

At a personal level, this Voice of the Muse reunion of mine has been more than the step back in time I expected it to be. As I have read and reread the book in preparation for this expanded edition, I have discovered new depth and meaning in its words, words that, as I already pointed out, were originally intended for me. Apparently, they still are.

I suggest in all my books for writers that our books, screenplays and other writing projects are sentient entities with minds and imperatives of their own. This latest experience with The Voice of the Muse has once again proven that to be true.

I'm gratified to have been given the gift of its words, not once but twice. And I'm excited to be sharing this new edition with you!

Photo by Mark David Gerson: El Matador Beach, Malibu, CA, where the new Voice of the Muse cover image was shot by photographer Kathleen Messmer. Visit my gallery website to browse or buy this and more of my photos and artwork.