"If 20 percent of the people aren't against you, then you're not going anyplace interesting, whether you're name is Martin Luther King Jr. or whether you're a dorky management guru [named Tom Peters]."
~ Dorky Management Guru Tom Peters

Creative expression is about risk-taking. It's about boarding the Starship Enterprise, taking off for parts unknown and going where no one has dared to go before.

It's all right to offend people, to push people's buttons, to take them up to that ledge on which we, as artists, live...and then to give them a gentle nudge. Art is about pushing boundaries. It's about forcing people (including the artist) out of their comfort zone and inciting them to reexamine their beliefs and rediscover who they think they are. Sometimes, it's about getting people mad at you. 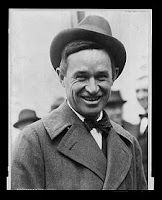 "You've got to go out on a limb," American humorist Will Rogers is reputed to have said, "because that's where the fruit is."

Where are you going out on a limb and taking risks with your writing? Where are you clinging to the tree trunk and playing it safe?

Where are you willing to get people riled up? Where are you holding yourself back for fear of being attacked?

Photo Credits: #1 Tom Peters by Allison Shirreffs; #2 Will Rogers from www.willrogers.org
Posted by Mark David Gerson at 11:57 AM

If some people love your work and others hate it, then you know you've written something powerful ... which is much better than having everything think it's "okay." I always take risks with my writing (which may explain why I'm still and unknown).
Lj
http://thesexclub.net

Thanks, LJ. And you're not entirely unknown. I've heard of you!!

Grin, those who know me know I am not afraid to write my mind. In fact, at work they fear the bullet point. ha! I'll write an email and my manager will ask.. did you need bullet points?

Really enjoyed reading your Risky Writing post today. Made me decide to start taking more risks in my writing and my life!

Arwen: As long as those bullet points don't come shooting out of a gun! Seriously, there's always balance involved. We're called to speak our minds and our truth, but always from a place of compassion and respect...as I'm certain you do.

You nailed that one, Mark. And it plays into what I wrote recently about holding out for your cup of stars. You can't let outside influences determine what you write if you want to leave a unique mark on the world...or an honest one.

Beautifully expressed, David. All I can add is "Amen"!

That's something extremely important to remember and something that I frequently forget. Thanks for putting this reminder out there.