The Word, According to Humpty Dumpty 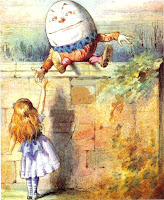 In the beginning was The Word, and The Word was with Humpty Dumpty...
"When I use a word," Humpty Dumpty said, in a rather scornful tone, "it means just what I choose it to mean — neither more nor less."
"The question is," said Alice, "whether you can make words mean so many different things."
"The question is," said Humpty Dumpty, "which is to be master -- that’s all."
Alice was too puzzled to say anything; so after a minute, Humpty Dumpty began again.
"They’ve a temper, some of them -- particularly verbs: they're the proudest -- adjectives you can do anything with, but not verbs -- however, I can manage the whole lot of them! Impenetrability! That’s what I say!"
"Would you tell me, please," said Alice, "what that means?"
"Now you talk like a reasonable child," said Humpty Dumpty, looking very much pleased. "I meant by 'impenetrability' that we’ve had enough of that subject and it would be just as well if you'd mention what you mean to do next, as I suppose you don’t mean to stop here all the rest of your life."
"That’s a great deal to make one word mean," Alice said in a thoughtful tone.
"When I make a word do a lot of work like that, said Humpty Dumpty, "I always pay it extra."
~ Lewis Carroll, Alice's Adventures in Wonderland and Through the Looking Glass

What's your relationship with words? Do you take charge of them, as Humpty Dumpty claims to have done? Or do you trust in their innate wisdom?

It wasn't so much over the words themselves that Humpty Dumpty claimed mastery. It was over rigid definitions. Are you a slave to those definitions? Or are you willing to free yourself to be as creatively playful as was Lewis Carroll?